by Matt Millar | Articles, Bayesian vs. Frequentist?, How To Measure Anything Blogs, News, What's New

Pop quiz: which of the following statements about decisions do you agree with:

Believing the first two statements will limit your effectiveness in using statistics in a business decision. The second two statements capture one of the important points in Applied Information Economics: small data is often very useful in decision making when there is great uncertainty. This article presents three examples of how a sample of just five data points can tip the scales in a business decision.

Decision: management is deciding on a proposal and wants to measure the benefits of the proposed organizational transformation.

In their business case, the variable “time spent commuting” has come back with a high information value. If the average time spent commuting is more than 20 minutes, then the decision has an acceptable ROI profile. They randomly select five people and ask them their commute times.

Decision: a baseball team manager needs to decide if he should send a player back to the minor leagues.

Decision: The Executive Team wants to improve project management by being better able to assess a 90% confidence range of development time based on engineers’ initial estimates.

The company has carefully tracked original estimates for five projects and can now compare them to actual duration:

If we want to get a 90% confidence interval for actual development time based on our data, how would we do that? We can start by plotting the 5 points on a scatter chart. 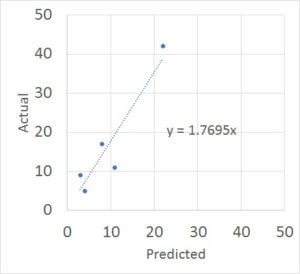 Based on a linear regression of these five points the actual time to completion is 177% of the initial estimate. Next we estimate a 90% confidence interval on the range for actual versus initial estimate. The ratios between the actual and predicted are: 213%, 191%, 125%, 300%, and 100%. Entering these values in the small sample calculator we get a 90% confidence interval for the average of 110% and 261%. So if the initial project estimate is 10 weeks, our best estimate would be 18 weeks and our 90% range would be 11 to 26 weeks.

Collecting data is all about resolving uncertainty. And in our busy work environment, we’re often expected to make the best conclusions in a limited amount of time. However, if we target the right variable we can improve our judgment with just a few data points.

So get out there and do some measurements! And reward yourself with better decisions.