Two Ways You Can Use Small Sample Sizes to Measure Anything 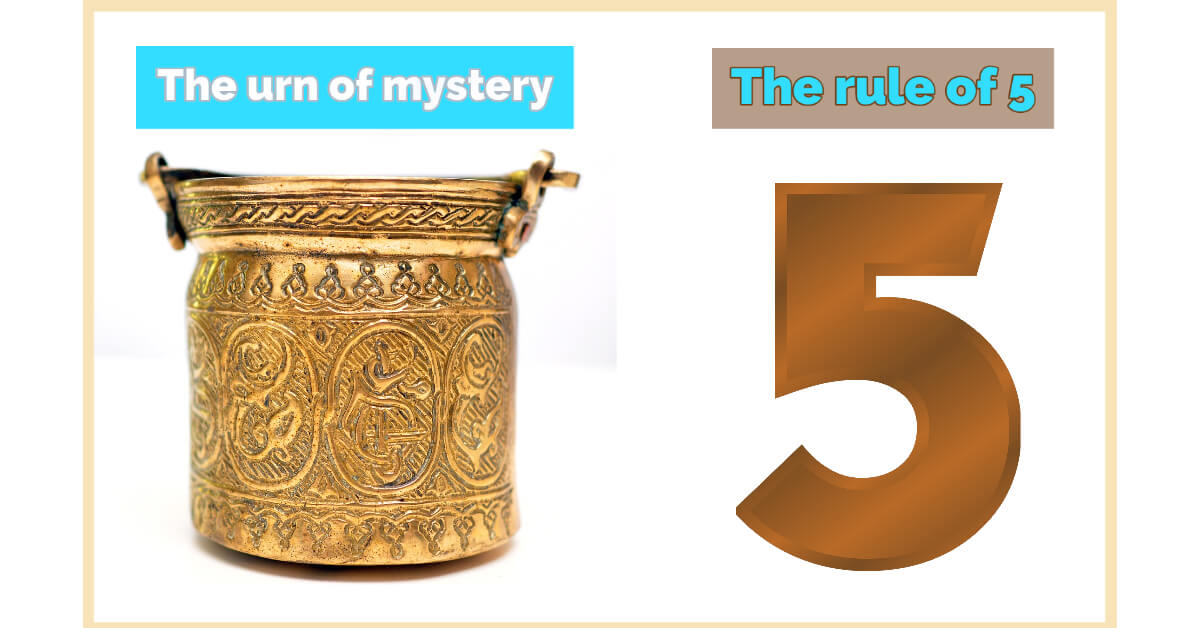 When it comes to statistics, there are a lot of misconceptions floating around. Even people who have scientific backgrounds subscribe to some of these common misconceptions.  One misconception that affects measurement in virtually every field is the perceived need for a large sample size before you can get useful information from a measurement.

Measurements are often dismissed, without doing any actual math, because someone believes they need a larger sample size to be “statistically significant.”   We see examples of this line of thought everywhere. In sports, for example, we dismiss predictive metrics because they naturally work with small sample sizes (a season is only so long, with only so many games, after all), choosing instead to go with “gut feel” and “expert knowledge.”

In other words, a measurement isn’t useless if the sample size is small. You can actually use small sample sizes to learn something useful about anything – even, as we’ll soon see, with really small samples.

And if you can learn something useful using the limited data you have, you’re one step closer to measuring anything you need to measure – and thus making better decisions.  In fact, it is in those very situations where you have a lot of uncertainty, that a few samples can reduce uncertainty the most. In other words, if you know almost nothing, almost anything will tell you something.

In How to Measure Anything: Finding the Value of Intangibles in Business, Doug Hubbard uses two under-the-radar statistical principles to demonstrate how even small amounts of data can provide a lot of useful insight: the Rule of Five and the Urn of Mystery.

The Rule of Five

Pretend for a moment that you’re a decision-maker for a large corporation with 10,000 employees. You’re considering automating part of some routine activity, like scheduling meetings or preparing status reports. But you are facing a lot of uncertainty and you believe you need to gather more data. Specifically, one thing you’re looking for is how much time the typical employee spends each day commuting.

How would you gather this data?

You could create what essentially would be a census where you survey each of the 10,000 employees. But that would be very labor-intensive and costly. You probably wouldn’t want to go through that kind of trouble.  Another option is to get a sample, but you are unsure what the sample size should be to be useful.

What if you were told that you might get enough information to make a decision by sampling just five people?

Let’s say that you randomly pick five people from your company. Of course, it’s hard for humans to be completely random, but let’s assume the picking process was about as random as you can get.

Then, let’s say you ask these five people to give you the total time, in minutes, that they spend each day in this activity. The results come in: 30, 60, 45, 80, and 60 minutes. From this, we can calculate the median of the sample results, or the point at which exactly half of the total population (10,000 employees) is above the median and half is below the median.

Is that enough information?

Let’s go back to the scenario. What are the chances that the median time spent in this activity for 10,000 employees, is between 30 minutes and 80 minutes, the low and high ends, respectively, of the five-employee survey?

When asked, people often say somewhere around 50%. Some people even go as low as 10%. It makes sense, after all; there are 10,000 employees and countless individual commute times in a single year. How can a sample that is viewed as not being statistically significant possibly get close?

Well, here’s the answer: the chances that the median time spent of the population of 10,000 employees is between 30 minutes and 80 minutes is a staggering 93.75%.

This may seem like a wide range, but that’s not the point. The relevant point is whether this range is narrower than your previous range.  Maybe you previously thought that 5 minutes per day or 2.5 hours per day were reasonable given what you knew at the time.  These values now would be highly unlikely to be medians for the population. Even with a small measurement of just five people, you significantly narrowed your range of uncertainty. If your uncertainty was that high before, you now have a much better idea.

Now suppose the proposed investment breaks even if the median time spent is 10 minutes per person per day.  That is, if the median time spent is any higher than 10 minutes, the proposed investment will do better than break even.  In this case you’ve already reduced uncertainty enough to be confident in a decision to invest. Likewise, you would be confident to reject the investment if the breakeven was 2 hours.  If your break even was, say 45 minutes, you might consider further sampling before you make a decision.

So, making better decisions is all about getting valuable information from measuring data. But it doesn’t take a lot of data to give you something useful to work with.

What if you could learn something useful with even less information?

The Urn of Mystery

Picture yourself in a warehouse. In front of you stands a man – we’ll say that he is dressed like a carnival barker, complete with fancy red coat, a top hat, and a mischievous look on his face. (This is a far cry from your usual corporate office environment.)

The carnival barker waves his arm toward the inside of the warehouse. You see rows and rows of large urns. You try to count them but they just keep going and going into the dark recesses of the warehouse.

“Each urn,” he says to you, “is filled with marbles – let’s say 100,000 marbles per urn. Every marble in these urns is either red or green. But, the mixture of red and green marbles varies from urn to urn. An urn could have 100% green marbles and 0% red marbles. Or 33% green marbles and 67% red marbles. Or it could be an even split, 50-50. Or anything else in between 0 to 100%. All percentages are equally likely. And assume that the marbles in each urn have been thoroughly and randomly mixed.”

The barker continues. “Here’s my proposition. We’ll play a betting game. We’ll choose an urn at random. Then, I’ll bet that the marbles in that urn are either mostly red or mostly green. I’ll give you 2-to-1 odds, and each time you’ll bet $10. That is, if I guess correctly, you lose $10.  If I’m wrong, you will win $20. We’ll play through 100 urns. Wanna take the bet?” he asks with a smile.

“Well, let’s make it a bit more fair for me,” the barker says. “Let me draw just one marble, chosen at random, from an urn before I make my pick. This will be completely random. There’s a special spigot at the bottom that will give me a single marble without allowing me to see the rest. Will you still play the game with me?”

You are probably like most people in thinking that one little marble in a large urn full of marbles isn’t going to matter. It’s too small of a sample size, right?

“You’re on,” you say, and the barker grins because he know he has you.

Most people think that the additional information either doesn’t help the barker at all or provides, at best, a small, marginal advantage – that he’ll win 51% of the time as opposed to 50%, or something like that.  After all, there are 100,000 marbles.

Do you know the barker’s new win percentage? Believe it or not, by taking just one sample out of each urn, his win percentage jumps from 50% to 75%. That’s an increase of 50%. So you’ll actually walk away from the game a loser.

This is called the Single Sample Majority Rule, which put formally says, “Given maximum uncertainty about a population proportion – such that you believe the proportion could be anything between 0% and 100% with all values being equally likely – there is a 75% chance that a single randomly selected sample is from the majority of the population.”

You now have actionable insight, more than you had before you started, with one, simple sample. Better walk away from this bet.

Applying These Principles to Measuring Anything

What the Rule of Five and Urn of Mystery teach you is this: when you attempt to measure something, assuming your methods are sound, you’re giving yourself more actionable data for better decisions that is better than simple intuition or gut feel.

Our intuition is often wrong when it comes to statistics and quantitative analysis. We can’t possibly believe that we can gain anything useful from a small sample size. And then there’s the issue of statistical significance.

Here’s the thing: when you measure something, you reduce your uncertainty, which is the best thing you can do to make a better decision. And when you have a lot of uncertainty (e.g., in the case of the urns where the share of marbles of a specific color could be anywhere between 0 and 100%), then even the first random sample can reduce uncertainty a lot.

The first step, though, is to believe that your intuition about statistics, probability, mathematics, and quantitative analysis is probably wrong. There are misconceptions keeping you from making better decisions through measuring and analyzing data. Decision-makers deal with these misconceptions all the time, and the result is that they’re not making the best decisions that they possibly could.

If you can get past raw intuition, or “gut feel,” like so many decision-makers and experts bank on, and you embrace quantitative decision analysis, you can gather more information even using ridiculously small sample sizes like in the Rule of Five or Urn of Mystery.

Don’t be afraid of not knowing what to measure, though. David Moore, former president of the American Statistical Association, once said, “If you don’t know what to measure, measure anyway. You’ll learn what to measure.” Doug calls this the Nike method: the “Just do it” school of thought.

You don’t need a large sample size to begin to measure something, even an intangible that you think is impossible to measure. Even with a small sample size, you can reduce your range of uncertainty – and, therefore, be on your way to making better decisions.