Top Under-the-Radar Cybersecurity Threats You May Not See Coming

by Joey Beachum | How To Measure Anything in Cybersecurity Risk, News 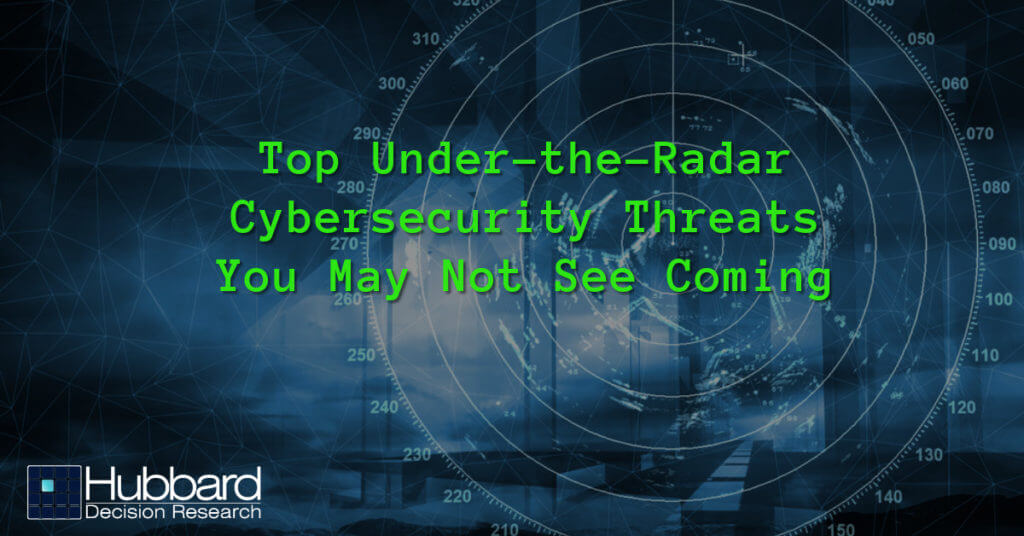 In every industry, the risk of cyber attack is growing.

In 2015, a team of researchers forecasted that the maximum number of records that could be exposed in breaches – 200 million – would increase by 50% from then to 2020. According to the Identity Theft Resource Center, the number of records exposed in 2018 was nearly 447 million – well over 50%. By 2021, damages from cybersecurity breaches will cost organizations $6 trillion a year. In 2017, breaches cost global companies an average of $3.6 million, according to the Ponemon Institute.

It’s clear that this threat is sufficiently large to rank as one of an organization’s most prominent risks. To this end, corporations have entire cybersecurity risk programs in place to attempt to identify and mitigate as much risk as possible.

Cybersecurity threats may vary in specific from entity to entity, but in general, there are several common dangers that may be flying under the radar – and may be some you haven’t seen coming until now.

A Company’s Frontline Defense Isn’t Keeping Up the Pace

Technology is advancing at a more rapid rate than at any other point in human history: concepts such as cloud computing, machine learning, artificial intelligence, and Internet of Things (IoT) provide unprecedented advantages, but also introduce distinct vulnerabilities.

This rapid pace requires that cybersecurity technicians stay up to speed on the latest threats and mitigation techniques, but this often doesn’t occur. In a recent survey of IT professionals conducted by (ISC)^2, 43% indicated that their organization fails to provide adequate ongoing security training.

Unfortunately, leadership in companies large and small have traditionally been reluctant to invest in security training. The primary reason is mainly psychological; decision-makers tend to view IT investment in general as an expense that should be limited as much as possible, rather than as a hedge against the greater cost of failure.

Part of the reason why this phenomenon exists is due to how budgets are structured. IT investment adds to operational cost. Decision-makers – especially those in the MBA generation – are trained to reduce operational costs as much as possible in the name of greater efficiency and higher short-term profit margins. This mindset can cause executives to not look at IT investments as what they are: the price of mitigating greater costs.

Increases in IT security budgets also aren’t pegged to the increase of a company’s exposure, which isn’t static but fluctuates (and, in today’s world of increasingly-sophisticated threats, often increases).

The truth is, of course, that investing in cybersecurity may not make a company more money – a myopic view – it can keep a company from losing more money.

Another threat closely related to the above is how decision-makers tend to view probabilities. Research shows that decision-makers often overlook the potential cost of a negative event – like a data breach – in favor of its relatively-low probability (i.e. “It hasn’t happened before, or it probably won’t happen, so we don’t have to worry as much about it.”). These are called tail risks, risks that have disproportionate costs to their probabilities. In other words, they may not happen as frequently, but when they do, the consequences are often catastrophic.

There’s also a significant shortfall in cybersecurity professionals that is inducing more vulnerability into organizations that already are stressed to their maximum capacity. Across the globe, there are 2.93 million fewer workers than are needed. In North America, that number, in 2018, was just under 500,000.

Nearly a quarter of respondents in the aforementioned (ISC)^2 survey said they had a “significant shortage” in cybersecurity staff. Only 3% said they had “too many” workers. Overall, 63% of companies reported having fewer workers than they needed. And 59% said they were at “extreme or moderate risk” due to their shortage. (Yet, 43% said they were either going to not hire any new workers or even decrease the number of security personnel on their rosters.)

A combination of less training, inadequate budgets, and fewer workers all contribute to a major threat to security that many organizations fail to appreciate.

Threats from Beyond Borders Are Difficult to Assess – and Are Increasing

Many cybersecurity professionals correctly identify autonomous individuals and entities as a key threat – the stereotypical hacker or a team within a criminal organization. However, one significant and overlooked vector is the threat posed by other nations and foreign non-state actors.

China, Russia, and Iran are at the forefront of countries that leverage hacking in a state-endorsed effort to gain access to proprietary technology and data. In 2017, China implemented a law requiring any firm operating in China to store their data on servers physically located within the country, creating a significant risk of the information being accessed inappropriately. China also takes advantage of academic partnerships that American universities enjoy with numerous companies to access confidential data, tainting what should be the purest area of technological sharing and innovation.

In recent years, Russia has noticeably increased its demand to review the source code for any foreign technology being sold or used within its borders. Finally, Iran contains numerous dedicated hacking groups with defined targets, such as the aerospace industry, energy companies, and defense firms.

More disturbing than the source of these attacks are the pathways they use to acquire this data – including one surprising method. A Romanian source recently revealed to Business Insider that when large companies sell outdated (but still functional) servers, the information isn’t always completely wiped. The source in question explained that he’d been able to procure an almost complete database from a Dutch public health insurance system; all of the codes, software, and procedures for traffic lights and railway signaling for several European cities; and an up-to-date employee directory (including access codes and passwords) for a major European aerospace manufacturer from salvaged equipment.

A common technique used by foreign actors in general, whether private or state-sponsored, is to use legitimate front companies to purchase or partner with other businesses and exploit the access afforded by these relationships. Software supply chain attacks have significantly increased in recent years, with seven significant events occurring in 2017, compared to only four between 2014 and 2016. FedEx and Maersk suffered approximately $600 million in losses from a single such attack.

The threat from across borders can be particularly difficult to assess due to distance, language barriers, a lack of knowledge about the local environment, and other factors. It is, nonetheless, something that has to be taken into consideration by a cybersecurity program – and yet often isn’t.

The Biggest Under-the-Radar Risk Is How You Assess Risks

While identifying risks is the foundation of cybersecurity, appropriately analyzing them is arguably more important. Many commonly used methods of risk analysis can actually obscure and increase risk rather than expose and mitigate it. In other words, many organizations are vulnerable to the biggest under-the-radar threat of them all: a broken risk management system.

Qualitative and pseudo-quantitative methods often create what Doug Hubbard calls the “analysis placebo effect,”(add footnote) where tactics are perceived to be improvements but offer no tangible benefits. This can increase vulnerabilities by instilling a false sense of confidence, and psychologists have shown that this can occur even when the tactics themselves increase estimate errors. Two months before a massive cyber attack rocked Atlanta in 2018, a risk assessment revealed various vulnerabilities, but the fix actions to address these fell short of actually resolving the city’s exposure—although officials were confident they had adequately addressed the risk.

Techniques such as heat maps, risk matrices, and soft scoring often fail to inform an organization regarding which risks they should address and how they should do so. Experts indicate that “risk matrices should not be used for decisions of any consequence,<fn>Thomas, Philip & Bratvold, Reidar & Bickel, J. (2013). The Risk of Using Risk Matrices. SPE Economics & Management. 6. 10.2118/166269-MS.</fn>” and they can be even “worse than useless.<fn>Anthony (Tony) Cox, L. (2008), What’s Wrong with Risk Matrices?. Risk Analysis, 28: 497-512. doi:10.1111/j.1539-6924.2008.01030.x</fn>” Studies have repeatedly shown, in numerous venues, that collecting too much data, collaborating beyond a certain point, and relying on structured, qualitative decision analyses consistently produce worse results than if these actions had been avoided.

It’s easy to assume that many aspects of cybersecurity are inestimable, but we believe that anything can be measured. If it can be measured, it can be assessed and addressed appropriately. A quantitative model that circumvents overconfidence commonly seen with qualitative measures, uses properly-calibrated expert assessments, knows what information is most valuable and what isn’t, and is built on a comprehensive, multi-disciplinary framework can provide actionable data to guide appropriate decisions.

Bottom line: not all cybersecurity threats are readily apparent, and the most dangerous ones can easily be ones you underestimate, or don’t see coming at all. Knowing which factors to measure and how to quantify them can help you identify the most pressing vulnerabilities, which is the cornerstone of effective cybersecurity practices

For more information on how to create a more effective cybersecurity system based on quantitative methods, check out our How to Measure Anything in Cybersecurity Risk webinar.