The One Question Every Risk Manager Should Ask

by Joey Beachum | How To Measure Anything Blogs, News, The Failure of Risk Management Blogs 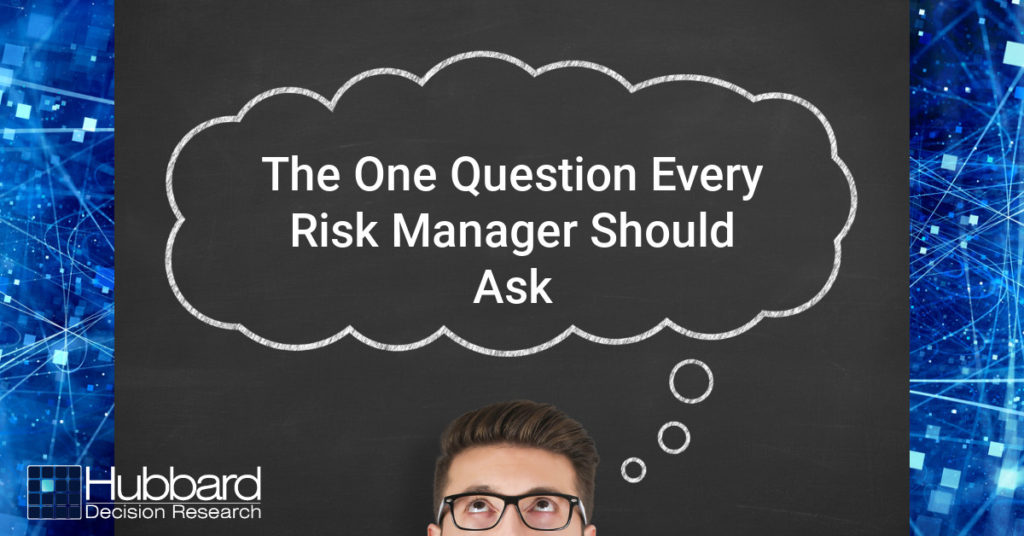 At any given time, an organization faces many risks, both known and unknown, minor and critical. Due to limited resources, not all risks can be mitigated. Without an effective risk management process, not all risks can even be identified. Thus, a risk manager’s job is to figure out how to best allocate his or her resources to best protect the organization. The only way to do so in an organized fashion is to have a risk management process – but there’s a big kicker: it has to work.

And as we’ve learned from the past three decades, it’s not a given that a process works as well as it needs to. Often, unfortunately, processes just aren’t very effective, and can actually harm more than they help.

When assessing the performance and effectiveness of your risk management process, it helps if you undertake a rigorous, critical examination of the process, starting with one question:  How do I know my methods work?

Before you answer, we need to clarify what this means.  By “works” we mean a method that measurably reduces error in estimates, and improves average return on portfolios of decisions compared to expert intuition or an alternative method.

Note that this is not the same as merely perceived benefits.  If, for example, estimates of project cost overruns are improved, that should be objectively measurable by comparing original estimates to observed outcomes.  Merely using a survey to ask managers their opinions about the benefits of a method won’t do.

Why We Can’t Rely on Our Perception

The reason we can’t rely on the mere perception of effectiveness is that we are all susceptible to a kind of “analysis placebo effect.”  That is, research shows that we can increase our confidence at a task while not improving or even getting worse.

For example, it has been shown that just using more data or more “rigor”, even when there is no real measurable improvement, has increased confidence – but not accuracy – in estimating the outcomes of law enforcement interrogations, sporting events, and portfolio returns<fn>DePaulo, B. M., Charlton, K., Cooper, H., Lindsay, J.J., Muhlenbruck, L. “The accuracy-confidence correlation in the detection of deception” Personality and Social Psychology Review, 1(4) pp 346-357, 1997)</fn>.

Merely having a system also doesn’t guarantee effectiveness or improvement. In one study in Harvard Business Review, the authors found that an analysis of over 200 popular management tools and processes had a surprising result: “Most of the management tools and techniques we studied had no direct causal relationship to superior business performance.”<fn>Kassin, S.M., Fong, C.T. “I’m innocent!: Effect of training on judgments of truth and deception in the interrogation room” Law and Human Behavior, 23 pp 499-516, 1999)</fn>

Throw in a myriad of reasons why humans are naturally bad at assessing probability and one can see that any risk management system predicated on subjective, uncalibrated human assessment is, by itself, inherently ineffective at best and dangerous at worst.

It makes sense, then, that if your risk management system fits the above (e.g. it has risk matrices, heat maps, and other pseudo-quantitative, subjective “measurement” systems), it may not be working nearly well as you want.

To be sure, you have to be able to measure how well your risk management system is measuring risk.

Measuring How You Make Measurements

So, how can we measure real improvements?  Ideally, there would be some big survey been conducted which tracked multiple organizations over a long period of time which showed that some methods are measurably outperforming others.  Did 50 companies using one method over a 10-year period actually have fewer big loss events than another 50 companies using another method over the same period? Or were returns on portfolios of investments improved for the first group compared to the second group?  Or were events at least predicted better?

Large scale research like that is rare.  But there is a lot of research on individual components of methods, if not the entire methodology.  Components include the elicitation of inputs, controls for various errors, use of historical data, specific quantitative procedures, and so on.  What does the research say about each of the parts of your method? Also, is there research that shows that these components make estimates or outcomes worse?

Let’s look at the most direct answer to how you can measure your improvements: having a quantitative model. Over 60 years ago, psychologist Paul Meehl studied how doctors and other clinicians made predictions in the form of patient prognoses and found something that was, for the time (and still today) very startling: statistical methods were consistently superior to the clinical judgments rendered by medical experts.<fn>N. Nohria, W. Joyce, and B. Roberson, “What Really Works,” Harvard Business Review, July 2003</fn> In 1989, another paper further solidified the notion that quantitative models – in this study, represented by actuarial science – outperform experts<fn>P.E. Meehl, Clinical Versus Statistical Prediction: A Theoretical Analysis and a Review of the Evidence. (Minneapolis, University of Minnesota Press, 1958)</fn>.

Calibrating experts so they can assess probabilities with more accuracy and (justifiable) confidence has also been shown to measurably improve the performance of a risk management system<fn>R.M. Dawes, D. Faust, and P.E. Meehl, “Clinical Versus Actuarial Judgment,” Science, 243(4899) (1989): 1668-1674</fn>. Calibration corrects for innate human biases and works for about 85% of the population. The results are quantifiable, as evidenced by the image below compiled from calibrating nearly 1,500 individuals over the past 20 years (Figure 1): 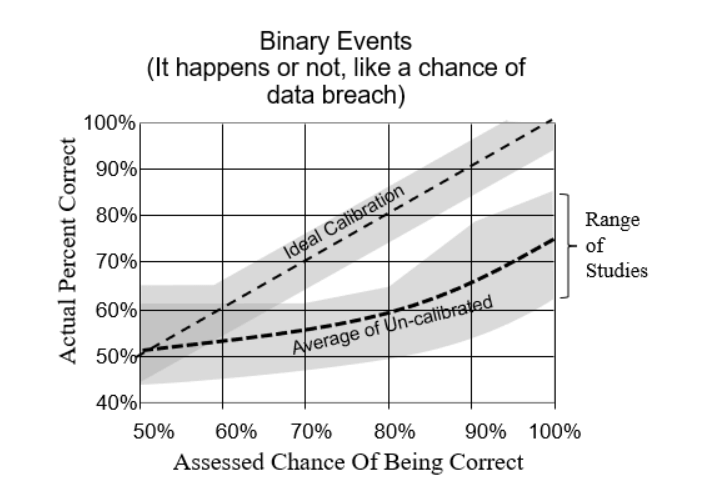 Other tools, such as Monte Carlo simulations and Bayesian methods, have also been shown to measurably improve the performance of a quantitative model. So, as we mentioned above, even if you don’t have exhaustive data to verify the effectiveness of the model in whole, you can still test the effectiveness of each individual component.

The bottom line: If you can’t quantitatively and scientifically test the performance and validity of your risk management process, then it probably is causing more error – and risk – than it’s reducing.

This research has already been done and the results are conclusive.  So, the only other question is why not get started on improvements now?